Out and About Tucson

The Garwood Dam in the Rincon Mountains

Looking for an interesting outdoor activity?  A moderately difficult 5 mile trail will take you past the historic Garwood Dam in Saguaro National Park East on the Garwood Dam Loop. 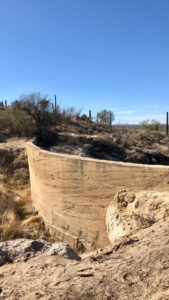 Nelson and Josephine bought the property (about 450 acres) from two original homesteaders in 1945.  Though they named the property the Bar G Ranch, the property was never stocked with cattle but used only as a residence.  Nelson constructed a makeshift road by using dynamite and dragging railroad ties to flatten the rough terrain.  Nelson began construction of the dam in 1948 primarily to supply water to the one room house that was started the same year.  The dam eventually became a steel framed, poured concrete structure that fed two 20,000 gallon storage tanks supplying water to a second larger home that was built in 1950. 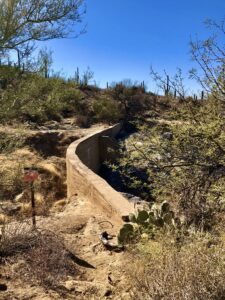 Little by little the Garwoods sold off parcels of the property to various entities.  In 1959 they sold the remaining acreage.  The purchaser spent little time on the property and the houses and other buildings fell into poor condition. In the 1960s the abandoned buildings were vandalized and in the 1970s fire consumed what remained of them.  Shortly thereafter, through Eminent Domain laws, the Park Service purchased the property from the owners.

Other metal storage tanks can be found in the area.  These tank sites were originally natural rock pool sites that were able to hold water most of the year.  Historically, these natural pools were used by Indigenous Americans and cattle ranchers, the latter leasing the land for grazing.  The last grazing lease from the park expired in 1979. 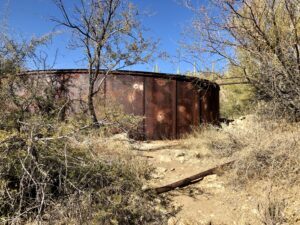 By the way, the Garwood Dam is in close proximity to the famed Tanque Verde Ranch.  The term tanque verde  or green tank refers to the reservoir tanks used by ranchers that would stagnate and fill with green algae.  Ranchers would often fill the tanks with goldfish or carp to eat the algae.  Who knew?!