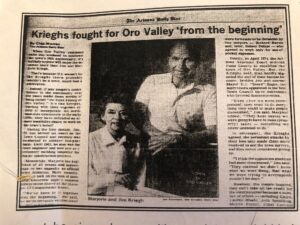 The following article is from the Oro Valley Historical Heritage Guide, April 2009

The Making of a Town by Marjorie K. Kriegh, Town Historian

(Marjorie Kriegh, wife of Jim Kriegh and first Town Historian for the Town of Oro Valley)

Our story began long ago, way back in 1968.  Tucson Mayor “Gentleman” Jim Corbett made a statement, which , to some area residents could be likened to the “shot heard round the world”.  Well, ‘round Tucson, anyway.  Mayor Corbett said that they (the areas around Tucson) will be taken in (to Tucson’s city limits) “kicking, stamping and screaming, if necessary”.  The City of Tucson’s political climate, as it was at that time, was not to many people’s liking and many, many people living outside Tucson’s corporate limits wished to remain so.  Some concerned citizens began to look at the feasibility of forming their own town in order to avoid being “absorbed” by the City of Tucson.

The State of Arizona, however, had done its part to discourage incorporation of areas on the “outskirts” of larger municipalities.  A ruling came down from the legislature which stipulated that an area proposed for incorporation must have at least 500 inhabitants who all had to exhibit common goals and objectives.  Additionally, to protect the larger cities, an area proposed for incorporation had to be farther than six miles from another incorporated city’s boundaries.  If the proposed boundaries were not six miles apart, then permission by the incorporated city must be given.  Larger cities and towns lobbied long and hard for these incorporation rulings because they did not wish to be hemmed in by a proliferation of “bedroom communities”; to avoid competition.

Some residents northwest of Tucson were undaunted by these rulings.  With the competent legal advice of Mr. Ellsworth Triplett, for whom I served as legal secretary at the time, interested people began to organize. These people came from, not only the area later to become known as Oro Valley, but also, from the Catalina Foothills area.

There were obstacles to overcome.  The “six mile” rule made incorporation of the Catalina Foothills area impossible, but, as Mr. Triplett advised, the outlying area which included the Oro Valley Country Club Estates and the Highlands Mobile Home Park, could conceivably be incorporated since the area was six miles distant from the City of Tucson limits.  (Later, the Highlands Mobile Home Park was dropped from the incorporation effort because less than 50% of the people favored the incorporation.)  At this time, the proposed Town was to be named, The Town of Palo Verde.”

Because the Oro Valley Country Club Estates, under the direction of Mr. Robert Daly, President of the Homeowner’s Association, was undertaking street improvement, interest in the incorporation effort waned for a time, but was renewed when Mr. E. S. (Steve) Engle, the new Oro Valley Homeowner’s President became interested.  Together with my husband, Jim Kriegh, they gathered citizen support from all areas proposed for incorporation, including Shadow Mountain Estates East and West, Campo Bello Estates, Linda Vista Citrus Tracts, and Oro Valley Country Club Estates.

Citizens from all these areas worked long and hard for many years, the culmination of their efforts being the filing of a petition for the incorporation of the Town of Oro Valley with the Pima County Board of Supervisors.  As may have been suspected this petition was promptly rejected by the Board, leading to a four year court battle which ended in the Arizona Supreme Court.  The decision handed down by the Supreme Court directed the Pima County Board of Supervisors to incorporate our tiny 2.5 square mile Town of Oro Valley.

This decision signified the birth of the Town of Oro Valley on April 15, 1974 and the beginning of a Town which, it is hoped, all citizens may be proud of today*

*The resolution to incorporate Oro Valley was adopted by the Pima County Board of Supervisors on April 15, 1974.  The first Mayor and Council were appointed on April 17, 1974, so April 17th is the official Town birth date.