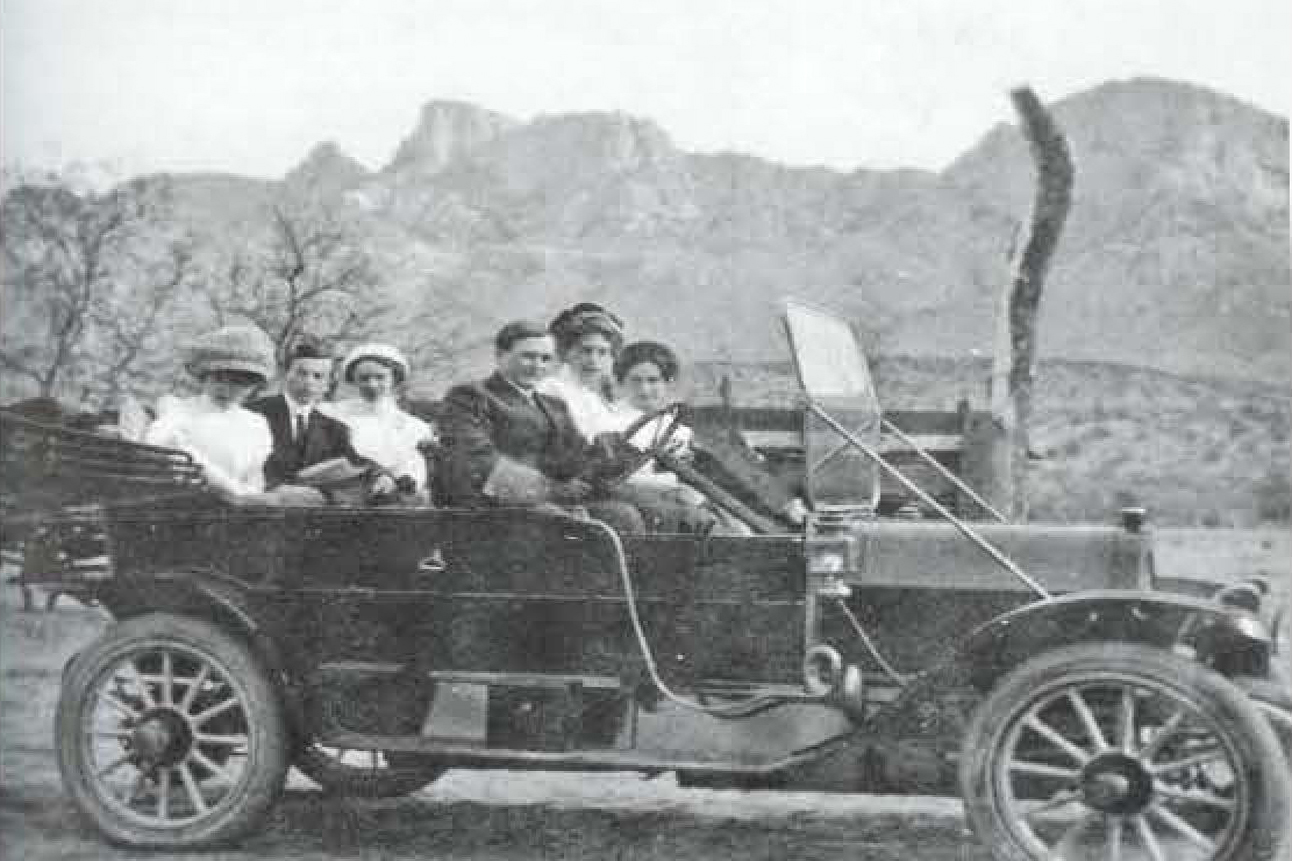 My Grandfather, George Pusch, arrived in New York from Germany in 1865. He was eighteen years old. He was accompanied by a friend, John Zellweger, a Swiss boy of 15 years old. They were meat cutters by trade and soon found employment in the city.

They were young and eager and soon they traveled across the country to San Francisco. There Pusch, having saved his money, bought a wagon and 14 mule team and headed for Arizona. He spent some time in Prescott, which was the largest town in the territory, and headed for Phoenix. Finally, about 1874, he arrived in Tucson, a town of 3000 inhabitants.

There they pooled their resources and bought a portion of the Canada del Oro Ranch–named it the Steam Pump Ranch. Water was plentiful and close to the surface. So, they rigged up a steam pump to bring the water to the surface.

Ranchers from all over Pinal County would bring their cattle herds to Tucson or Red Rock for shipment to market and would water their cattle the night before loading at the Steam Pump Ranch. Pusch got 15 cents a head for each cow that was watered.

He also ran cattle on the ranch–his pasture included a forest permit in that part of the Catalinas we now call Pusch Ridge and Pusch Peak.

Mathilda Feldman, a 20 year old girl from Drockenburg, Germany, journeyed to Tucson in 1879 by train to visit her friend, Sophia Spieling, who married John Zellweger in 1883. Mathilda and George Pusch were married in 1880, one year after her arrival in Tucson.

Mathilda and George had nine children–two who died soon after birth. My mother, Gertrude, was the eldest of those who survived. and she lived all her life in Tucson until her death in 1974

About this time Pusch bought the PZ or Feldman Ranch.     Its headquarters were located between Mammoth and Winkelman, not far from the confluence of the Aravaipa Creek and San Pedro River.

The Feldman Ranch grew–at one time it stretched from the San Pedro River to Oracle Junction. Pusch ran as many as 15,000 range cattle on the ranches. The headquarters included a store, post office, school, church, blacksmith shop, and a number of ranch houses.

Pusch used the Steam Pump Ranch as an overnight stop for the trip to the Feldman Ranch–55 miles from Tucson. He would travel in a wagon across the Antelope Plains, and on many occasions mounted Apaches would circle the wagon to greet my grandfather.

He never carried a gun, but instead would give the Indians sugar, flour, and other provisions.

Often times the children would accompany him on the trip to Feldman–two of the youngest had long blonde hair. The Apaches took delight in running their fingers through the girl’s hair.

Apache hunting parties camped in the foothills above the Steam Pump Ranch–near where the Garrett Plant is located–and would beat on the kitchen door to demand food from the cook. My grandmother would quickly direct the cook not to argue with the visitors.

Prospectors watered their burros at the ranch prior to going in the Catalina foothills to seek a treasure nobody ever found. For years there had been a tale of a fabulous gold mine in the Catalina’s, sealed with an iron door.

In 1922 Harold Bell Wright, a prolific writer at the time came to Tucson for his health. He had tuberculosis. Wright was a visitor at the Steam Pump on a number of occasions and my mother told him the story of the Mine with the Iron Door.

Wright prevailed upon George Wilson, who owned the Linda Vista Ranch near Oracle, to allow him to live at an isolated line camp in the Canada del Oro. There Wright wrote the Mine with the Iron Door, and also greatly improved his health.

He sold the story to Principal Picture Corporation and insisted that it be filmed at the Linda Vista Ranch to repay his old friend, George Wilson for allowing him to live in the canyon line shack.

Wilson had to build cottages and other facilities to house the actors and film crew. So, after filming was completed he had to figure a use for the new facilities. He established the Linda Vista Guest Ranch–the first guest ranch in Arizona.

It accommodated 45 guests and in its heyday attracted such notables as Clark Gable, Gary Cooper, and Rita Hayworth. Other guests were such national figures as Vice-President Dawes and Herb Brownell. Boyd Wilson, George’s son, told me that Tom Dewey came to the ranch immediately after his loss of the presidency to Harry Truman.

Joe McAdams, bought Rancho Romero and Roberta Nicholas, of Johnson Johnson Pharmaceutical Co., bought and occupied for many years the ranch where Catalina and Saddlebrook are now located.

In 1933 Jack Proctor who operated the Pioneer Hotel and a board member of the Valley Bank bought the Steam Pump Ranch from Mathilda Puschs estate for $10,000.00.

Proctor would send his favorite guests to the Steam Pump to enjoy ranch life. Francis Rooney of the Manhattan Construction Company, Tulsa, spent several vacations at the ranch and subsequently purchased the Canada del Oro Ranch which adjoined the Steam Pump to the South. This ranch included most of Oro Valley Estates and property across the Canada.

Pancho Mendoza ran 100 mother cows on the Rooney property and constructed dikes in the area where the golf course is located today to bring in the flood waters from the Canada. His son, Gene, still lives on the property.

In 1958 Rooney sold a portion of the Canada del Oro Ranch to Jerry Timan, who afterwards organized Horizon Land Company. About the same time, Lou Landon, who was a frequent visitor to Tucson and an ardent golfer, organized a group of Chicago investors and purchased 375 acres from Timan for $187,000.00.

Timan and Landon subsequently presented a development plan for the area, including the golf course and Oro Valley Estates, to the Board of Supervisors which approved the plan and held a press conference at the Saddle 6 Sirloin Steak Club on Oracle Road to publicize the proposed development. The Arizona Daily Star the next morning in banner headlines announced a $44,000,000.00 development plan for Oro Valley.

Lambert Kautenburger chaired the Board of Supervisors, and his son, Bill, is now a member of the Oro Valley Town Council

Several years ago, Mr. Proctor died and left the Steam Pump Ranch to his grandsons, Henry and John Leiber. Henry (Butch) is now operating a ranch in Montana, and John is practicing law and living with his family on the property.

Until his death about a year ago, Hank Leiber, the major league ball player, lived in the adobe house which my grandfather, George Pusch built aver 100 years ago.