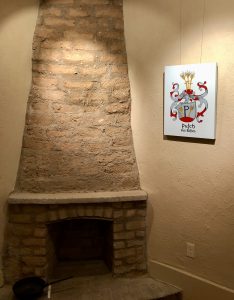 Do you like to sleuth?  Our Collections Committee often has to don their Sherlock Holmes deerstalker hats to get to the bottom of historical mysteries.  Back in 2009 Oliver Pusch of Echzell, Germany corresponded via email to a member of the OVHS.  He shared a photo of the Pusch family crest painted on glass.  Oliver is the grandson of Wilhelm Pusch, who was the brother of George Pusch. (Got that geneologists?)

Now fast forward to 2019 when several OVHS Collection Committee members wanted to find out more about the family crest.  Did it have a long history, what did it denote and what did it say?  Sue Chambasian resurrected Oliver’s email address and took the chance that it still might be active.  It was! Oliver related that the crest was designed by his brother, Hans-Jorg Pusch, as a high school project.  The Pusch family ancestors used plough horses for farming until the 1950s.  Thus, the images on the crest depict wheat stalks and a plough.  It was quite difficult to decipher the “old” German spelling and lettering but with a bit more investigating OVHS member, Gail Munden, determined the lettering is old German Frankur.  The word “aus” means “from”.  The word Bisses has a “sharp s” in place of the double “s”.  Bisses was a small village which is now a part of Echzell, Germany (30 miles northeast of Frankfurt). Hence; “Pusch from Bisses”. 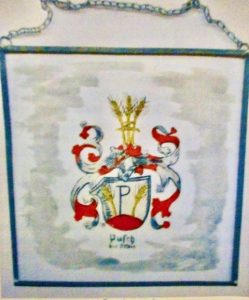 Gail then put her professional art skills to work and created a reproduction of the crest on cradled birch board.  It now hangs in the Pusch House at Steam Pump ranch.  A photo of the reproduction was sent to Oliver.  His response?  “The picture is very nice!  I hope to see it in a few years at the ranch.” 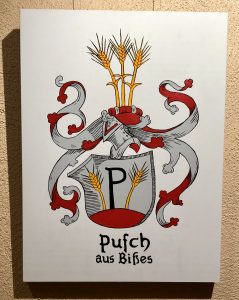 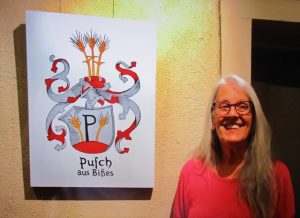