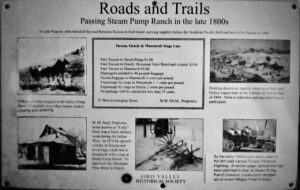 Oracle Road, now known as Historic Route 80, was quite the thoroughfare in the late 19th and early 20thcenturies.  Someone that helped connect Tucson to both Oracle and Mammoth was successful businessman, rancher, and entrepreneur, William “Curly” Neal.  There’s no doubt Curly would have stopped at Steam Pump Ranch enroute to our neighbors to the north as he carried out his business endeavors.

William was born in the Cherokee Nation in Oklahoma to a mother who had walked the Trail of Tears and a father of African-American descent.  William became self-sufficient at a young age working at odd jobs.  At nineteen he met Buffalo Bill Cody, who enlisted William as a military scout.  William left the army in 1878 but remained friends with Cody for the rest of his life.

After the army, Curly (due to his long wavy hair) settled in Tucson and took on a job as a cook in the Maison d’Arcy restaurant.  After accumulating some money and other financial support, William started a stage line and freight business.   Curly would have likely rubbed elbows with George Pusch in both Tucson and at Steam Pump Ranch.  George and Johann Zellweger opened a butcher shop in 1876 which provided meat to the public and restaurants in Tucson.   In 1874 Steam Pump Ranch was operating and was a popular stop as it allowed the stage lines a place to water and rest the horses and offered the services of blacksmiths.  Note the fare from Tucson to Steam Pump was $1.00!

Curly was awarded the mail contract for the Tucson-Oracle-American Flag route so Oracle Road would have been a routine path for the carriers.  Along with the stage line and the freight line  that carried  supplies from Tucson to Ft. Lowell, Curly carted ore, wood, and water to the mines in Mammoth and Oracle.

As noted in the Mohave County Miner news regarding Wm. Neal Freight:

“One of the largest freighting outfits in the world is used in connection with the mill at the Mammoth property.  The distance from the mine to the mill is three miles, all but half a mile downgrade.  Three teams move 145 tons of ore a day.  Each team consist of 20 animals, and they draw four wagons.  The wagons are immense affairs, almost as big as box cars.  Wm. Neal is one of the best businessmen in southern Arizona.”

While in Tucson, William met Annie Box, the daughter of the proprietor of the boarding house where he lived. Annie had similar heritage in that her mother was Cherokee and her father was of English and African descent.   In 1892 they were married and moved to Oracle when Annie’s mother deeded them property.  It was there that William and Annie established the Mountain View Hotel.  The hotel and health resort attracted a variety of visitors including celebrities (Buffalo Bill), dignitaries and those seeking the adventure of the “wild west”.  Annie primarily ran the hotel while Curly managed the other businesses and even a ranch in New Mexico. She was known for her lively and independent spirit and as a hostess, Annie made her guests feel welcome and comfortable.  Annie sold the hotel in 1939 shortly after a freak accident on the property took Curly’s life at the age of 87.  Curly and Annie’s remarkable and industrious lives make our local history rich and should never be forgotten.

Interested in local history?  Stop by Steam Pump Ranch on the second and fourth Saturdays in February, March and April.  The Oro Valley Historical Society presents docent-guided tours from 10 a.m. to Noon.  No reservations are required for the 50-minute tour that leaves on the hour and every fifteen minutes thereafter.  Tours leave from the OVHS tent that is located just south of the Farmer’s Market ramada.  The suggested donation supports the cost of our displays, exhibits and ongoing programs.  We hope to see you!

The Oro Valley Historical Society is a 501 (c) (3) non-profit volunteer organization, whose mission is “To promote research, preservation, education, and dissemination of historical information related to the greater Oro Valley area”.

We invite you to become a member or volunteer or donate.. Visit us at ovhistory.org and help keep Oro Valley history alive!